When Queen Elizabeth II died on September 8, she left behind a legacy that many in Great Britain believe to be one of the single greatest monarchical reigns in history. Now, Britain has a new king. King Charles III. Sure, there have been quite a few larger-than-life personalities in the English (and later British) royal lineage. Just to name a few, there was Victoria (known for her sponge cake and numerous television series), the 8th Henry (known for his difficulty in staying
20 views0 comments

After a three year pandemic absence, San Diego Comic con returned live and in person to the San Diego Convention Center in July. For the first time since those distant pre-pandemic days of 2019, the massive comic book and popular media extravaganza or commonly known as San Diego comic con returned to the downtown convention Center with a 10 D’s numbering more than 150,000 able to one again once again participate in person. Of course, I was one of them. Because of the COVID-19
16 views0 comments

Oh bother. This is what happens when a copyright expires.

In today’s story, Winnie the Pooh is no longer scheming ways to get Rabbit’s stockpiled honey. Today, Pooh is an ax wielding mass murderer and his deranged little friend, Piglet, is right there beside him, helping add to the body count. What? You don’t remember that storyline from A.A. Milne’s beloved stories about the English youth, Christopher Robin, and his stuffed animal friends who had come to life set in the Hundred Acre Wood or from the Walt Disney Company’s animated f
35 views0 comments

“I feel the need, the need for a copyright infringement lawsuit.”

Locked on! Top Gun: Maverick targeted by federal court lawsuit. While actor Tom Cruise has been doing an excellent job of avoiding the crosshairs of old age, Paramount Pictures was not as lucky when it comes to claims of copyright infringement leveled against it following the recent release of Top Gun: Maverick. The latest installment of Top Gun (originally released in 1986) picks up, more or less, where the original left off but with a 35-year time jump. In the original, Tom
45 views0 comments

Nothing fishy about this settlement

Netflix and Dark Horse Comics have settled a copyright lawsuit filed by comic book artist Kevin Atkinson who had claimed that the idea for a fish-tank headed villain in the television series The Umbrella Academy infringed his copyright in the original idea for a fish-tank headed villain. Comic book fans know that The Umbrella Academy started out as a Dark Horse Comics series written by Gerard Way (yes, THAT Gerard Way) and illustrated by Gabriel Bá that revolved around a dysf
10 views0 comments

San Diego Comic-Con without Marvel is like a day without sunshine ... and Thor ... and Iron Man ...

With the much-anticipated return of an in-person version of San Diego Comic-Con, it was disappointing to learn that Marvel Studios likely will not return to the storied halls of the San Diego Convention Center. Again. When Disney bought Marvel several years there were assurances all around that the acquisition wouldn’t affect Marvel’s commitment to its fans and that it would almost certainly maintain its presence at places like comic book conventions. Why wouldn’t it? The mos
10 views0 comments

Embedded Copyrights – The Not-So-Funny Side of Memes

Do you ever forward memes to your coworkers and social media friends? It might be a picture of a kitten hanging from a branch and being told to just “hang in there” or it might be a grumpy cat who “hates Mondays” or it might not even feature a picture of a cat. It might be a photo of actor Gene Wilder portraying creepy Willy Wonka and making a snarky comment about your use of the Internet. The point is that memes are a permanent part of life online and yet no one (until now)
12 views0 comments

How Complimentary Wi Fi Policies May Lead to Copyright Infringement Claims Wi-Fi is everywhere and much of the time it is offered for “free.” Starbucks offers it. So, too, does McDonald’s. In fact, you may even be offering it yourself. And, while many businesses understand that it is a great way to bring in new customers and business, many do not understand the potential implications of allowing relatively unfettered access to the Internet. Recently, we’ve had a number of cli
11 views0 comments 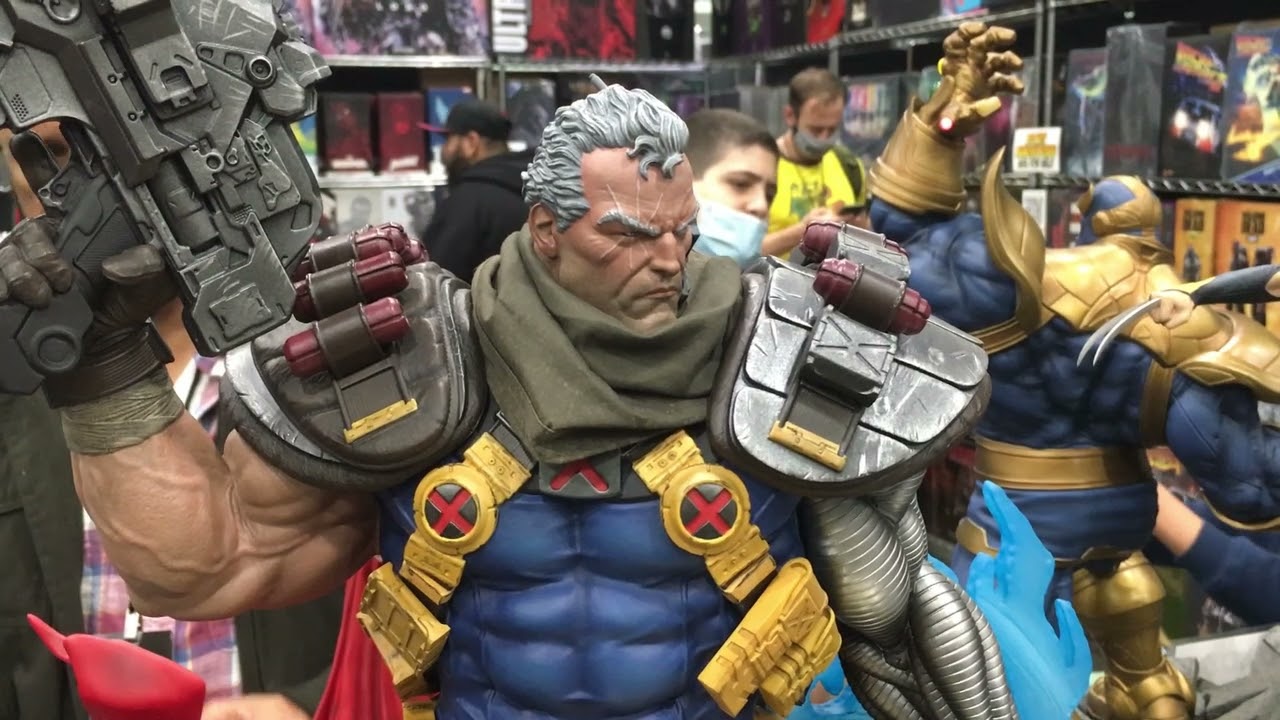 Where creatives, producers, distributors, and fans come together in southern California. Not nearly as well-known as its cousin to the south, San Diego Comic-Con, the Los Angeles Comic Con has gone by several names during its much briefer history, including, most notably, Stan Lee's Comikaze, but LACC has many of the same offerings without all the crazy hullabaloo of 150,000+ attendees. And, of course, the intellectual property is in abundance. #LACC2021 #LosAngelesComicCon #
4 views0 comments

“I’m sure the universe is full of intelligent life. It’s just been too intelligent to come here.” ― Arthur C. Clarke April has been a very busy month for everyone especially when you consider the extraordinary, worldwide effort to get us all vaccinated (or “jabbed” as the Brits like to say) and to regain a semblance of normality in our daily lives (I’m especially looking forward to finally leaving my mask at home), but also because Ingenuity finally flew on Mars, March Madnes
3 views0 comments

Banksy On Fire ... Just Not Literally

Luckily, there are always new developments in the IP world to keep us distracted. Whether it was street artist Banksy’s recent social commentary/graffiti caper on the walls of (former) Reading Prison in the U.K. or the sale of one of his pieces, Morons, by Injective Protocol, a cryptocurrency company, which then burned it (yes, burned it into nonexistence) while broadcasting live through a Twitter account @BurntBanksy. However, before going up in flames, Injective Protocol ha
2 views0 comments

“The artist brings something into the world that didn’t exist before, and he dos it without destroying something else.” - John Updike In all honesty, I am a bit bummed. I know 2020 is but a distant memory and 2021 promises a return to normalcy (of a sort), but it was hard to suffer the one-two blow delivered earlier this month when the organizers of the most highly anticipated popular media events on the West Coast announced that WonderCon 2021 and San Diego Comic-Con 2021 wo
16 views0 comments

The U.S. Court of Appeals for the Ninth Circuit has ruled that a publishing company, ComicMix, LLC, was in the wrong when it published a mashup of Ted Geisel’s book (aka Dr. Seuss) Oh, the Places You’ll Go with characters from Star Trek in a Kickstarter campaign titled Oh, the Places You’ll Boldly Go! #trademarks #copyrights #trademarklaw #copyrightlaw #DrSeuss #StarTrek #intellectualproperty #intelletualpropertylaw #IPLawyer #DavidBaker #OCLawyer
7 views0 comments

“But he who dares not grasp the thorn. Should never crave the rose.” ― Anne Bronte Did you watch the Big Game? Kinda boring, wasn’t it? Even the commercials and halftime show seemed flat to me. Maybe it was the small COVID crowd or the fact that we were still under quarantine in California, but it just didn’t feel the same. Likewise, the end of the College football season didn’t seem the same either. Other than Alabama winning the National Championship, of course. That seems
19 views0 comments

Evermore Park, a small amusement park in Utah, has filed suit against Taylor Swift and her management company alleging that the naming of her most recent album Evermore (and the sale of related merchandise) constitutes trademark infringement. Why an obscure amusement park would complain of being linked to an international recording star remains unclear. #Evermore #EvermorePark #TaylorSwift #trademarks #copyrights #intellectualproperty #FederalCourt #USPTO #intellectualpropert
4 views0 comments

"In the long-run, every government is the exact symbol of its people, with their wisdom and unwisdom; we have to say, Like People like Government." - Thomas Carlyle So, the first week of January really happened, didn’t it? And, if you were paying attention to the unrelenting media coverage from our nation’s capital, you probably noticed several of your fellow citizens sporting stylish t-shirts, baseball caps, and even morale patches (those Velcro® backed symbols originally us
13 views0 comments

Last month, the CASE Act was signed into law by President Trump as part of the massive 5,593-page, $1.4-trillion omnibus spending and COVID-19 relief bill, titled the Consolidated Appropriations Act, 2021. Originally, the Copyright Alternative in Small-Claims Enforcement (“CASE”) Act was introduced in 2019 to establish a copyright small claims system that allows copyright creators to take action against infringers on a smaller scale than filing lawsuits in federal court. Supp
3 views0 comments

“Outside of a dog, a book is man's best friend. Inside of a dog it's too dark to read.” - Groucho Marx How long does a trademark last? It lasts as long as it serves the purpose of identifying the source of goods or services. And this is no less true for a popular cartoon character that debuted in 1962. The Jetsons is an animated sitcom produced by Hanna-Barbera that originally aired in primetime on American television from 1962–1963. It featured a space age family of the same
5 views0 comments
1
2
bottom of page